I want to start by saying that Sunday was truly one of the best days of my entire life. I have never felt the excitement and adrenaline from anything else and I am so glad I finally got to run my dream race. I also want to say thank you to ALL of you who cheered, sent messages, prayed, made signs, stood for hours to spectate, and made this marathon the best ever! I had heard it before but I can say with confidence, there is nothing like the New York City Marathon. No marathon will ever compare to Sunday. My heart is so so full right now. I am still smiling like a fool! 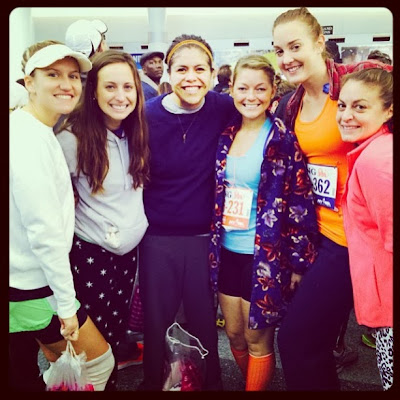 
The morning started bright and early with a 5:45 am wake-up call. Katie, one of my dearest friends stayed with me in Brooklyn to head to Staten Island together. As luck would have it because the 4 train decided to run local we were late so were able to run into all these lovely ladies. It made the morning go by quickly and it was so fun to see and chat with all of them before the race. Definitely helped calm the nerves! We arrived to Staten Island, and after going through security we eventually said our goodbyes and headed to our respected start villages. I was the only one who was in the Green Wave, so I had some 'me' time for a bit before I needed to head to my corral.

By 10:10 were in the corrals and being lead up to start in the bottom section of the bridge. The cannon went off promptly at 10:30 and about a minute later I crossed the start line. I was on the bottom of the bridge and despite it getting bad 'reviews' I honestly didn't mind. I could still see everything and the fact that the wind was pretty terrible I didn't mind running on the bottom. The climb didn't seem super tough, but that was probably just the adrenaline and excitement of it all. I knew coming off the bridge I was going to see my good friend Morgan right about the 5K mark so that gave me something to look forward to! 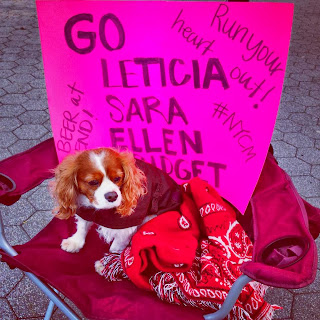 I saw Morgan and her cute dog, Berkley and gave them a wave and kept on moving. I settled into a comfortable pace in Brooklyn and felt great. I really loved Brooklyn! Everyone was so pumped and it was great to hear crowd support. I can say that my outfit of choice for the day was a huge success! SO many people yelled " Go Texas, Hook'em!" which of course made me so incredibly happy. I was feeling good and knew that 4 miles later I was going to see my good friend, Katie who would have my first GU to take and some water. I was loving 4th avenue and counting down the blocks to get to her at 4th Avenue and 10th street. I saw her from afar and she had this sign: 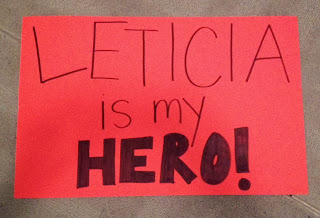 You guys, I have the best friends ever. Katie was so excited to see me and so was I! She gave me a quick pep talk and I continued on! The rest of Brooklyn was amazing and the crowds just got better and better through the course. I was still absolutely loving the race, the spectators, the signs, the cheers. I knew I wouldn't be seeing anymore friends until Queens so I just focused on moving forward and willing the miles to tick away. They did and before I knew it I was almost to the Pulaski Bridge where I would be looking for Kristin, who was going to have this sign: 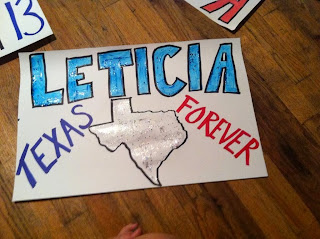 Seriously, I wanted to see this sign SO badly but I could not spot her anywhere. Sad day. This is where the day turned really sad because as soon as I stepped on to the Pulaski Bridge both of my quads cramped.. terribly. I could not believe I had cramped this early on in the race. I just shook my head. I stopped for a minute and then kept running despite the immense amount of pain I was feeling in both legs. I literally couldn't believe it was happening, but through it all not once did I ever think of quitting. I was determined to make it out of Queens and into Manhattan no matter what it took. I went over the Queensboro bridge and despite the climb seeming like it took forever it wasn't too terrible. When I turned the corner that led to 1st Avenue the crowd was just 100% INSANE. I knew that I was now at 60th and I just had to make it to 97th to my friend who would be waiting for me with a GU and water. In the meantime I was able to see, Jen volunteering at Mile 17! Again, despite the pain, seeing her made me so happy! Right after Jen, a random spectator had a banana and I took it and was so thankful. I was wishing and praying it would be help with the cramps. I finally reached 97th to my friend and fuel and powered forward. I winded up seeing several friends along 1st Avenue, including, Ashley aka Running Bun who snapped a few photos for me including one of my all times faves: 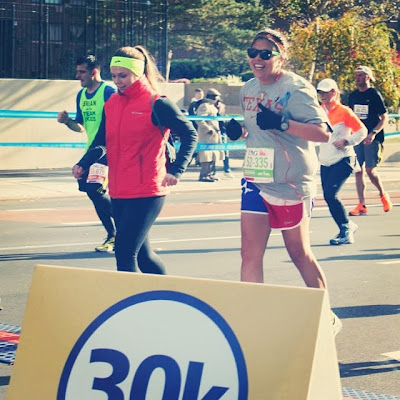 That's my dear friend Melissa to my right!

Somehow I'm smiling but geez louise I was hurting so bad. Seeing friends along the course is really what pushed me through. I knew I just could not give up and couldn't quit even though my legs continued to try to tell me to stop, to give up. I remember seeing a sign in Brooklyn that said: "Finishing is the only effing option.". Word. I remembered that and I knew that was what I had to do no matter how long it took. Melissa left me to tackle the Bronx, gave me some words of encouragement and told me she'd see me at the Finish Area Family Reunion. The Bronx brought some more rough moments despite trying to plow up the Willis Avenue Bridge I just couldn't anymore. I stopped and walked it to conserve some energy for the rest of the race. On the bridge I saw, Emily, who was SO happy and smiley :) (You looked great, woman and congrats on a great race!) When I was leaving the Bronx behind I got a little teary eyed because I knew I was back in Manhattan and I knew that the finish was finally within reach! Thank you, Jesus! I probably was crying more tears of joy than anything. My next goal was to make it to 127th and 5th Avenue where two of my best friends from college would be. I know Candace would have her little girl with her so knowing that made me soooo happy! She also made a video for me where she was saying 'Run, Leticia, Run'. 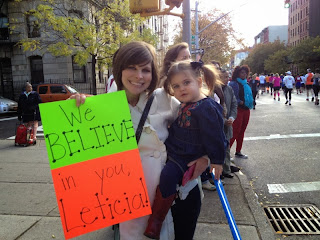 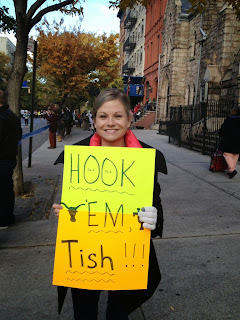 Yet again, I cannot thank my friends enough for their support on Sunday! I would not have made it without them. I forgot about the miles and just remembered the friends I'd see along the way. I stopped for a quick hello with the three of them and then continued on to 5th Avenue. Living in NYC and running up 5th Avenue many times I knew that an incline to Central Park was what awaited me. It was hard, friends. I was so frustrated that my legs would just not cooperate but again I kept repeating a mantra that an Austin runner told me, 'Keep Moving Forward'. I remember vividly getting to 94th Street and 5th and telling myself I was running the rest of the way, no more walking, I was finishing this and getting that medal. I entered the park and the cheers continued. I was so excited to finally be there! I winded up seeing my old roommate, and fellow Texan, Elise right at Mile 24. I gave her a thumbs up and was so grateful to have seen her at that point. I hit Central Park South and again the crowds were overwhelming. I was so happy, so grateful, so tired, and so ready to be done! I turned into the park from Columbus Circle and kept pushing as hard as I could. I remember seeing the 400 yards to go sign and I think I yelled 'YES' out loud. Made it up that last climb and finally saw the famous finish line! 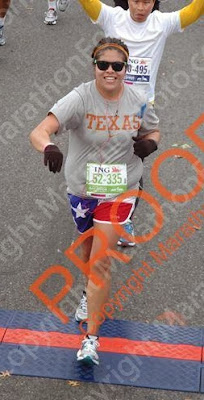 Done! My time (5:37:13) was nothing that would make a record book and in that moment I could care less. I fought hard for that finish line, really really hard. All I knew was that I had accomplished a dream of mine by completing the New York City Marathon. Physically, my body had the toughest day it's ever had in a race over the past two years. My quads failed me hard at mile 13! Like seriously? But mentally I had the best race I've ever had in my entire running career. Never once did I stop believing. Never once did I contemplate quitting. I was so determined to finish no matter what and that's just what I did. One of my biggest goals for that day was to smile a lot... and I did that all day long.

Thank you to my family, friends, the runner community, Finish Line PT, my physical therapist, Alison, my running coach Michele, and so many others for making this dream of mine become a reality. My heart is bursting with joy and I loved every (painful) moment of this race. I will never forget it. I am proud to say I'm forever a Finisher. 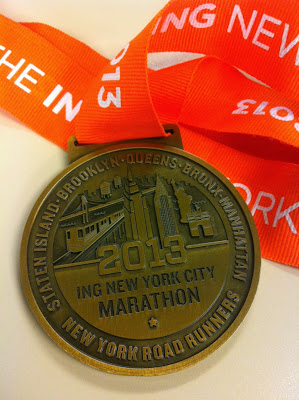 Great recap. So happy for you!

You are simply amazing! It was so great to follow your journey. I'm so so proud of you. Since I missed you at mile 15 we're going to have to try again! LOVE YOU!

you are a rockstar, girl!!! my adrenaline is pumping just READING this!!

i am so proud of you, and was checking instagram all day waiting to hear about your finish!!!

WAY TO GO, LETICIA!! So, so happy for you. I hope you're celebrating a lot!

SO happy for you, and so glad that I could provide a bit of happiness at mile 17!! You were so strong :)

So Happy for you I know this was a dream come true for you.

Congratulations, sweet friend! You are amazing and I am so glad you are in my life! So bummed I missed you at mile 18 :/ Maybe next year? =)

So, so happy for you, Leticia! I love seeing you with that great big smile on your face, despite the pain you were going through. "It was hard, friends." That's for sure but you totally hooked 'em. You make me BELIEVE that anything is possible. Now I hope you fully enjoy the post-race after glow, and of course, many home alone reruns. the best!!! congrats! xoxoxo

YEA! Loved reading this. Failed quads and loving life despite it! So proud of you!

Congratulations!!!!! You are a rockstar and I have so much respect for you that you did not give up. Your attitude was amazing and you should be so proud. Loved getting to meet you this week and I look forward to seeing you again! Xo! Ali

I loved this post, friend! I'm so incredibly proud of you. You are one of the most determined and STRONGEST people I know. So proud of you for never ever giving up! You will ALWAYS be a finisher. Congratulations on a dream come true!

Some of my favorite blogs!

My Going Away Party!